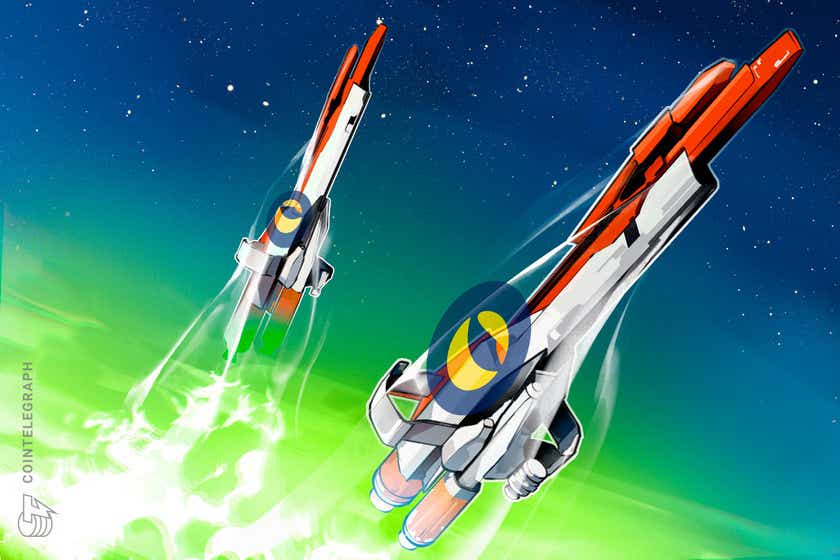 The successful launch of the long-awaited Columbus-5 upgrade is just one of the factors in LUNA’s ascension to a new record high.

Protocol upgrades are one of the biggest drivers of momentum because they show developers’ dedication to fixing bugs, incorporating user requests and adding new features that make the protocol competitive and shore up the token’s value.

One project that has seen its token price rally to a new all-time high following the launch of a highly anticipated upgrade is Terra (LUNA), a blockchain protocol that uses fiat-pegged stablecoins like TerrUSD (UST) to create a global payments system.

Three reasons for the price breakout in LUNA include the launch of its Columbus-5 upgrade which introduced a LUNA burning mechanism, the protocol’s adoption of the IBC standard which opens Terra to the Cosmos ecosystem and an increase in DeFi applications and total value locked on the protocol.

Columbus-5 launched on Sept. 30 and according to Terra developers and independent analysts, the upgrade is the most significant development to happen to the protocol to date.

1/ Columbus-5 is now officially live as the new Terra mainnet!

Welcome to the future of Terra https://t.co/EFnQnFr2lB

One of the notable changes to come along with the upgrade was a modification to the project’s tokenomic model which leads to all LUNA used to mint UST being burned, instead of going into the community pool.

According to data from Terra, there were $832 million worth of LUNA burned in the genesis block of Columbus-5.

This change has introduced deflationary pressure to the LUNA supply and it could help boost its price in the long term as demand for UST grows.

A second reason for the boost in LUNA’s momentum was its integration with the Inter-Blockchain Communication (IBC) standard which allows the Terra network to communicate and interact with protocols in the Cosmos ecosystem.

This integration opens up Terra and its UST stablecoin to more widespread adoption throughout the Cosmos ecosystem and make it the stablecoin of choice for applications and chains in the network.

With a larger pool of projects now having access to UST, this could lead to a further deflation in the supply of LUNA becaus more will need to be burned in the process of minting new UST.

Related: Evolve or die: How smart contracts are shifting the crypto sector’s balance of power

The total value locked in the Terra ecosystem is surging

A third reason for the bullish price moves in LUNA has been the network’s growing ecosystem of decentralized finance (DeFi) protocols that have helped push the total value locked on the protocol to a new all-time high.

According to data from Defi Llama, the total value of assets locked on the Terra network reached a record $10.07 billion on Oct. 4 right as LUNA price was breaking out to a new record high.

Currently, Terra’s TVL is above $10 billion and the top-ranked platform in terms of TVL is Ancor Protocol (ANC) with $3.86 billion. ANC is the main avenue for minting UST by pledging LUNA or Ether (ETH) as collateral.

Other notable DeFi protocols on the network include Lido (LDO), which has a TVL of $3 billion, Mirror (MIR) with a TVL of $1.38 billion and Terraswap which has a $1.32 billion TVL.

VORTECS™ data from Cointelegraph Markets Pro began to detect a bullish outlook for LUNA on Sept. 26, prior to the recent price rise.

The VORTECS™ Score, exclusive to Cointelegraph, is an algorithmic comparison of historical and current market conditions derived from a combination of data points including market sentiment, trading volume, recent price movements and Twitter activity.

As seen in the chart above, the VORTECS™ Score for LUNA began to pick up on Sept. 21 and reached a high of 73 around one hour before the price began to increase 108% over the next two weeks.