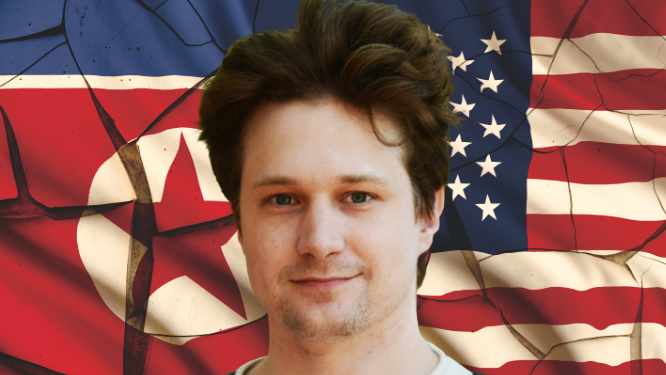 An Ethereum developer, Virgil Griffith, has been sentenced to five years and three months in U.S. prison after he pleaded guilty to a charge brought on by speaking at a crypto conference in North Korea. According to the U.S. Department of Justice (DOJ), his presentation provided the Kim Jong Un regime with “technical advice on using cryptocurrency and blockchain technology to evade sanctions.”

Griffith pleaded guilty in September last year to one count of conspiracy to violate the International Emergency Economic Powers Act (IEEPA). The charge carries a maximum term of 20 years in prison. However, in a plea deal, prosecutors agreed to seek no more than six and a half years.

The Ethereum developer was arrested in November 2019 in Los Angeles. He is charged with violating the IEEPA “by traveling to the Democratic People’s Republic of Korea (DPRK or North Korea) in order to deliver a presentation and technical advice on using cryptocurrency and blockchain technology to evade sanctions,” the DOJ said.

The crypto enthusiast has been in federal custody since July last year following his second arrest when Judge Castel revoked his bail. According to the federal judge, a surge in the value of his cryptocurrency holdings gave him the means and incentive to flee. He was reportedly arrested when logging into his Coinbase account.

Inner City Press quoted Judge Castel as saying Tuesday: “Some says Mr. Griffith is being persecuted for promoting crypto. But that’s not what this case is about. He pled guilty the day before trial. It was an intentional violation of sanctions, which are intended to avoid military conflict.” The judge concluded:

Virgil Griffith has no ideology. He’ll play off both sides, as long as he is at the center. I sentence him to 63 months in prison and a fine of $100,000.

The ‘US vs. Virgil Griffith’ Court Case

Despite that the U.S. Department of State had denied Griffith permission to travel to the DPRK, Griffith presented at the DPRK Cryptocurrency Conference, knowing that doing so violated sanctions against the DPRK.

The DOJ noted that at no time did Griffith, a U.S. citizen living in Singapore, obtain permission from the U.S. Treasury Department’s Office of Foreign Assets Control (OFAC) “to provide goods, services, or technology to the DPRK.”

The Department of Justice further added that “Griffith and other attendees discussed how the DPRK could use blockchain and cryptocurrency technology to launder money and evade sanctions” at the conference. There were approximately 100 other attendees.

What do you think about Virgil Griffith’s sentencing? Let us know in the comments section below.