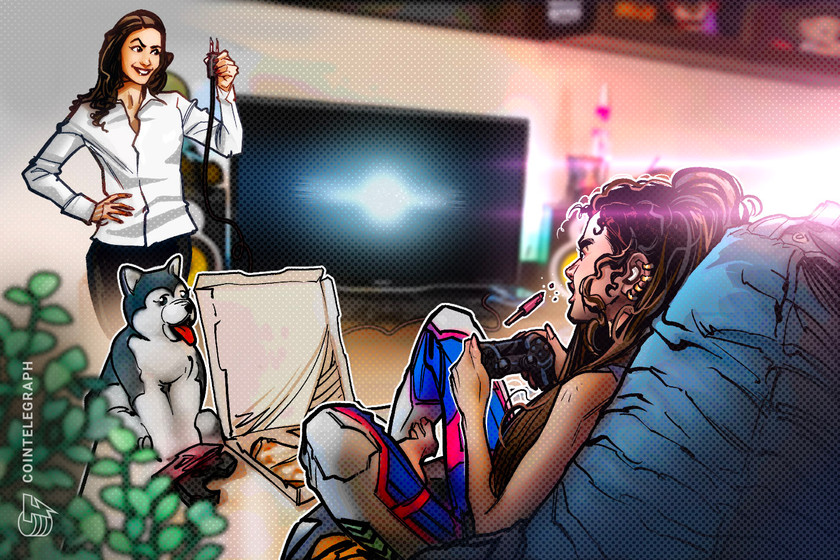 Enjoy Axie Infinity, DeFi Kingdoms, and other cryptocurrency games while they last, because lawmakers are poised to crack down by mid-2023.

Are cryptocurrency games innocent fun? Or are they Ponzi schemes facing an imminent crackdown by regulators in the United States?

Tokens related to cryptocurrency games — known colloquially as “GameFi” — were worth a cumulative total of nearly $10 billion as of mid-August, give or take a few billion. (The number may vary depending on whether you want to include partially finished projects, how you count the number of tokens that projects technically have in circulation, and so on.) In that sense, whether the games are legal is a $10 billion question that few investors have considered. And that’s an oversight they may soon regret.

That’s because a bipartisan consensus appears to be forming among legislators in the U.S. that the industry needs to be shut down. They haven’t addressed the issue specifically — good luck finding a member of Congress who has uttered the word “GameFi” — but there are at least two bipartisan proposals circulating among senators that would effectively eject these gaming projects from American soil.

The Responsible Financial Innovation Act, offered in June by Senators Cynthia Lummis (Republican from Wyoming) and Kirsten Gillibrand (Democrat from New York), would, in Lummis’ words, classify a “majority” of cryptocurrencies as securities subject to regulation by the Securities and Exchange Commission (SEC). And this month, Senators John Boozman (Republican from Arkansas) and Debbie Stabenow (Democrat from Michigan) offered a second proposal — the Digital Commodities Consumer Protection Act. The effect would be similar, but with a stronger emphasis on classifying Ethereum as a commodity — putting it under the purview of the less heavy-handed Commodities Futures Trading Commission (CFTC).

Securities classification for Axie Infinity, DeFi Kingdoms and other games

According to the SEC definition that Congress is looking to affirm, any token in which users invest with “an expectation of profit” is likely to be a security. Let’s talk a bit about what that may mean for your favorite tokens.

Related: 34% of gamers want to use crypto in the Metaverse, despite the backlash

Why do liquidity pools matter? Because users are “treating it as an investment,” blockchain expert and Rutgers Business School fintech professor Merav Ozair noted in an interview last month. “If it’s a token used to buy artifacts for the game, that’s not a security. But if you can take the token and use it for investments in securities, then that token has a different use case,” she said.

The definition is also likely to result in a problem for projects that have profited from initial coin offerings (ICOs), private token sales, or selling nonfungible tokens (NFTs). That includes Axie — which sold 15% of the total AXS supply in pre-game or private token sales — as well as DFK, which sold more than 2,000 “Generation 0” characters to kickstart its game last year.

“Once they’re using [something] to generate capital, they fall under the definition of a security,” Ozair said.

Beyond the obvious, precedent indicates that SEC prosecutors are likely to find a host of additional reasons to classify gaming tokens as securities. In a case filed last month, the agency argued that a number of tokens listed on Coinbase constituted securities for reasons that ranged from developers referring to investors as “shareholders” to one project’s decision to feature a photo of its CEO pointing at an advertisement that ridiculed Goldman Sachs.

Penalties that game developers could face may vary depending on how lenient SEC officials feel. At the very minimum, developers will be required to follow the same disclosure laws by which public companies in the U.S. abide. That means disclosing public officers, principal stockholders — or those who hold more than 10% of token supply — and an annual report that includes an audited balance sheet and cash flows.

Disclosure requirements alone could come as a rude awakening for many developers, who have become accustomed to running projects worth millions — and occasionally billions — without disclosing their names. But, more importantly, a securities classification would likely mean big fines for offending projects.

In one case that could serve as an indicator of how regulators might approach the issue, the SEC settled this month with a project that engaged in an ICO while failing to register its offering as a security. In that case, developers agreed to file with the SEC — and compensate investors for their alleged losses — or face a penalty of up to $30.9 million.

“Intent matters,” Christopher Makridis, a tokenomics expert and adjunct associate research scholar at Columbia Business School, noted in an interview with Cointelegraph. “Some NFT and GameFi projects are so convoluted that there’s a clear evasion of the rules.”

At the same time, he said, “If you think about the role tokens can play in gamifying education, an overly rigid and narrow definition is going to exclude a lot of value-creating projects and deter many inventors from building in the U.S.”

Alabama, Hawaii, Utah, and 47 other states may want to have a word

Regulation out of Washington, D.C. is just one challenge coming down the pike for embattled crypto gaming enthusiasts. A less foreseeable issue stems from what the late U.S. Defense Secretary Donald Rumsfeld termed “unknown unknowns.”

In this case, an example comes from an unlikely triad of U.S. states — Alabama, Hawaii and Utah. (If anyone is counting, Canada is also on this list.) Each jurisdiction (mostly) prohibits gambling, including raffles — which have become exceedingly popular in the world of crypto gaming.

Axie, for instance, held a month-long raffle between January and February of this year promising users the chance to win a variety of NFTs if they “released” — meaning burned or deleted — their characters. DFK quickly followed suit, asking users to gamble on potentially losing their characters in March in exchange for an opportunity to receive better (more expensive) “Generation 0” characters. Smaller raffles have become ubiquitous in DFK in more recent months, with options to participate in both daily and weekly contests, among others.

Experts say the raffles pose a problem for U.S. authorities even outside of the three states where they’re outright illegal.

“What they need to do to be legal is set it up as a sweepstakes, which means there is an alternative free means of entry that has an equal opportunity to win as those that pay to play,” David Klein, the managing partner at New York-based law firm Klein Moynihan Turco LLP, said in an interview with Cointelegraph.

“If you have to put a $200 item on the line — meaning you ruin it — to enter, then that is consideration,” Klein added. “Unless there is an alternative, 100% free method of entering, like mailing in a postcard, or calling a 1-800 number, or going to a website and filling out information.”

The list of problems didn’t end there. Disgruntled players have long criticized aspects of DFK’s raffle system — including a promise to award 800 “amulets” (an NFT representing a piece of equipment) randomly to players who held between approximately $1,000 and $50,000 in JEWEL tokens from Dec. 15 to Jan. 15. As of mid-August — seven months after the raffle’s end — the amulets had yet to be awarded, with developers promising that the equipment is still in the works.

“There are a lot of problems there,” Klein said. “When you have these contests, it’s important to communicate. The start date [of the raffle] has to be announced in advance of the contest starting. The contest rules have to be drafted, and they cannot be meaningfully changed. You have to do what you say you’re going to do by way of awarding prizes and when. You have to report to specific state jurisdictions who won and supply them with a list of winners within X amount of days. And if you don’t do so, you violate those state statutes.”

That’s in addition to any other regulatory or legal hazards that developers may have instigated by taking their projects global before assembling legal teams to examine potential hazards.

Beyond unforeseen legal ramifications, developers face a more apparent problem: a rapidly diminishing user base. The number of users interacting with Axie Infinity fell from a peak of 744,190 on Nov. 26, according to blockchain data aggregated by DappRadar, to 35,420 on Aug. 20 — a decline of 95%. DFK players, meanwhile, declined by 85%, from a peak of 36,670 in December to 5,290 as of Aug. 19.

The decline comes amid a rapid expansion in circulating token supply, with DFK’s JEWEL supply expanding from roughly 60 million to more than 100 million over the same period. The supply stands to increase by 500% — to 500 million — by mid-2024, not including a new token — CRYSTAL — the game launched on the Avalanche (AVAX) chain.

When asked how many years of hard prison time developers could be facing for improperly conducted raffles, Klein — who handles compliance for a slate of confidential, big-name NFT projects — demurred. “I want to help the industry do it right,” he said. But, regarding projects that haven’t complied, he said, “You could be accused of violating state gambling laws by a regulator, which is criminal. You could be sued by a private litigant who is upset. Or a combination of the foregoing.”

Axie Infinity appears to have 80 million tokens in circulation, with another 190 million scheduled for release over the next three-and-a-half years. It merits noting that developers appear to be tinkering with official circulation figures, which may become another cause for scrutiny among securities regulators in the future.

Rapidly expanding token supplies — combined with a diminishing number of buyers — means unrelenting downward price pressure, an issue that could drain developers of legal funding when it’s most needed.

Can devs do something?

Lummis, Gillibrand and other lawmakers have indicated that Congress will likely pass legislation clarifying securities law related to crypto by mid-2023. The impending sea change begs a question: Where are the developers behind these projects? Nary a peep has been heard from the $10 billion industry. (By the way, keep in mind that figure only counts the value of tokens related to gaming projects and not their characters, land, or other NFTs.)

Developers behind the top 16 play-to-earn projects — according to CoinGecko’s list — have made their identities known. That obviously includes those associated with Axie Infinity developer Sky Mavis. But the majority, like those behind DFK, have opted to remain anonymous, disclosing little about even the countries in which they reside. (In fairness, DFK did incorporate a legal entity — Kingdom Studios — in Delaware this year. That entity did not respond to a request for comment.)

Realistically, developers have fewer than 365 days to begin lobbying legislators if they would like to see congressional proposals amended. So far, they’ve been radio silent. With each day that quietly passes, it seems increasingly likely that silence is going to result in GameFi investors getting wrecked.

Rudy Takala is the opinion editor at Cointelegraph. He worked formerly as an editor or reporter in newsrooms that include Fox News, The Hill, and the Washington Examiner. He holds a master’s degree in political communication from American University in Washington, D.C.

The opinions expressed are the author’s alone and do not necessarily reflect the views of Cointelegraph. This article is for general information purposes and is not intended to be and should not be taken as legal or investment advice.