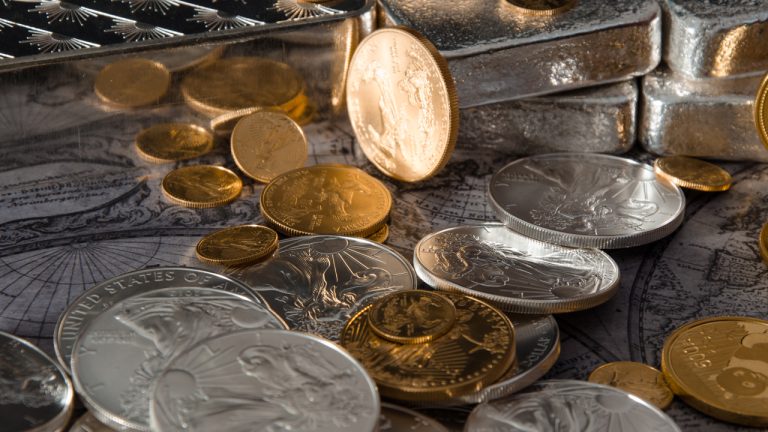 On Friday, October 7, 2022, the precious metals gold and silver dropped in U.S. dollar value following the recent U.S. jobs report for September. The USD value of gold per troy ounce is awfully close to slipping below the $1,700 range, while the price of silver is teetering near the $20 threshold.


Just before the weekend, Wall Street’s major indices tumbled as the latest U.S. jobs report for September is making investors believe the Federal Reserve will continue its aggressive rate hikes. The price of bitcoin (BTC) slid 3.4% against the U.S. dollar, and ethereum (ETH) dropped 3.2% during the past 24 hours. The entire crypto-economy hovering at around $979 billion on Friday, and it is down 2.4% at 2:30 p.m. (ET). In addition to the crypto economy, all four major precious metals — gold, silver, platinum, and palladium are down between 0.64% to 3.32%.

Kitco’s precious metals senior market analyst and columnist Jim Wyckoff detailed on Friday afternoon that the data stemming from the U.S. jobs report was “arguably the most important U.S. data point of the week.” Wyckoff noted that the official data was 263,000 jobs, “which was just below the expected rise of 275,000.” The news, Wyckoff reckons, may lead to the U.S. central bank keeping its aggressive stance going strong.

“The August report showed non-farm jobs rise of 315,000. The U.S. unemployment rate dropped to 3.5% in September, which was lower than expected,” Wyckoff wrote on Friday. “The August jobless rate was 3.7%. Average hourly earnings were up 4.98% from last year at the same time. The marketplace reckons the jobs report did nothing to dissuade the Federal Reserve from its aggressively tight monetary policy,” the senior market analyst added.

Similar to equity and cryptocurrency markets, gold markets felt the pressure of the latest U.S. data point. At the time of writing, the nominal U.S. dollar value of a single troy ounce of .999 fine gold is 1,701.40 per unit. Some exchanges have seen gold drop below the $1,700 threshold on Friday as well at $1,699 per ounce.

Silver is also nearing dropping below the $20 threshold on Friday, as it’s 20.35 nominal U.S. dollar per ounce of silver as the weekend approaches. Gold’s USD value per ounce is down 0.64% and silver is down 1.87% during the last 24 hours. Platinum shed 0.33% and palladium’s price slid by 3.32% on Friday afternoon (ET).

The analyst’s statements concerning the formation of a market bottom are similar to Mike McGlone’s recent analysis. The ​​Bloomberg Intelligence commodity analyst explained in a recent commodities report for October that he saw the price of gold forming in a similar fashion to the way it did in 1999.

In addition to gold resuming its rally in the near future, McGlone added in his October crypto report that when the “ebbing economic tide turns,” McGlone and his team see “propensity resuming” for bitcoin (BTC) and ethereum (ETH) and he believes they will “outperform most major assets.”

What do you think about gold and silver’s recent decline during the last 24 hours and following the latest U.S. jobs report? Let us know what you think about this subject in the comments section below.