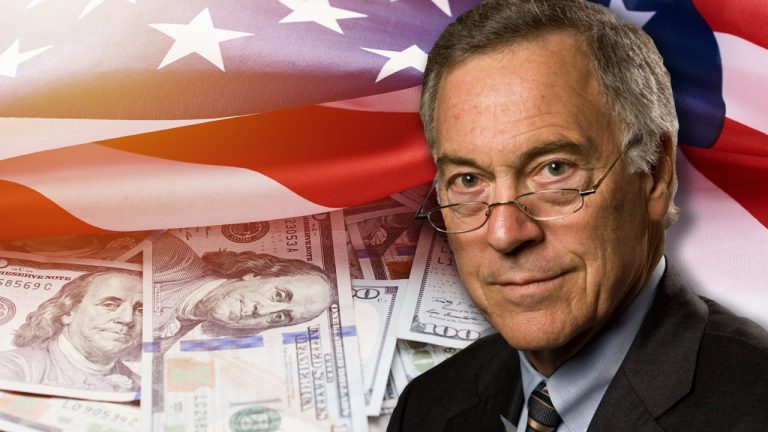 Amid the chaotic economy, plagued with central bank tinkering, supply chain issues, and red-hot inflation, the professor of applied economics at Johns Hopkins University, Steve Hanke believes a “pretty big recession” will take place in 2023. Speaking in an interview on Oct. 28, Hanke said that he updated the probability of a U.S. recession to a 90% chance, as he believes the money supply has tightened at an “unprecedented” rate.

Professor Steve Hanke has been critical of the central banks worldwide and on Friday, he said the chances of a recession is very likely. Hanke spoke with the news anchor for Kitco News David Lin, and explained that he upped his prediction to a 90% chance a U.S. recession will occur. “Where we’re going is determined by where the money supply is going,” Hanke told Lin on Friday. “The Quantity Theory of Money is a way to determine national income determination.”

The professor of applied economics at Johns Hopkins University added:

Inflation in the U.S. has been an issue and the U.S. Federal Reserve’s key inflation gauge, the personal consumption expenditures (PCE) price index, increased by 0.5% in September. Furthermore, the September consumer price index (CPI) report had shown consumer prices jumped to 8.2%. Hanke says quantitative tightening is now a big issue as the money supply has contracted significantly, the economics professor stressed during his interview.

“The last seven months, the money supply has actually contracted by 1.1%,” Hanke told the Kitco anchor. “That’s almost unprecedented. That means, of course, you have a big change in the money supply and then there’s a transmission mechanism. There are lags between the thrusts in the money supply, whether it’s going up or it’s going down, and what happens to the real economy,” Hanke added. The economics professor opined that he thinks these factors will lead the U.S. toward a large recession.

Some time, in 2023, we’ve got a pretty big recession baked in the cake. So GDP numbers, they’re a great thing and you can celebrate it today, it’s not negative anymore, we had a positive number — the whole picture looks like the economy is kind of flat for the last year, but it’s going to hit south.

Hanke, however, is not a fan of cryptocurrencies like bitcoin and he’s critized the country of El Salvador for adopting bitcoin as a form of legal tender. In June 2021, a few months before bitcoin (BTC) tapped $69K per unit, Hanke explained that “with [Nayib] Bukele at the helm” his country faced “financial ruin.” Bukele shot back at Hanke’s critique when BTC reached $60K per unit in mid-October 2021.

Hanke is a fan of countries creating currency boards, an idea that leverages the use of a monetary authority to maintain a currency’s fixed exchange rate. Bitcoin, by design, is the antithesis of Hanke’s favored currency board solution as BTC’s network is decentralized, and the free market chooses the cryptocurrency’s exchange rate.

What do you think about Steve Hanke’s opinion that says a “pretty big recession [is] baked in the cake?” Let us know what you think about this subject in the comments section below.